Walton & Company was first alerted about this project from Genesis Engineers, Inc after completing the Bayer project in Myerstown with them. Walton and Genesis have developed a good working relationship, working together on several projects over the years. Through our previous working relationship with Genesis, and them having confidence in our capabilities, they knew we were a match for the task ahead. Everyone knew the mechanical portion of the project, and the schedule would be the driving factors for completion. Estimators Chuck Hanna and Tim Emerich diligently worked hand-in-hand with Genesis, to land the job.

The project began on 11/29/2010, and with 10,123 man hours, and a completion date of 4/1/11, we realized the challenging opportunity that was ahead of us. As you can imagine, the project began to move very quickly right from the start. We began our underground electro-fused lab waste piping immediately. Jason Hamme really educated me with his experienced knowledge of this installation. As this installation was underway, Mike Betack was frantically doing piping take-offs in order to get the submittal process started. Everything from domestic water, chilled water, hydronic heat, compressed air, steam/condensate, deionized water, vacuum, and natural gas piping. Mike and Terry McCandless did a great job, contacting vendors, and getting the best pricing that they could, and not missing a beat with turning the submittals around.

During the very early stages of the project, Genesis made the decision to eliminate the coordination drawing process, due to the vast amount of room above the ceilings. Enter Sam Reisinger. Sam began measuring duct and coordinating with Jason, Charlie Jefferson (who was now on board) and all the other trades. This onsite coordination was key to the installation, and our ability to keep the schedule. The shop started cranking out ductwork (project total, 71,599 lbs.), and Sam and his team never looked back.

As the ductwork progressed forward, Jason and Charlie had their team following right behind. The plan they developed was simple. We would support the duct from the structure, and then the piping from the duct. “Fail to plan, plan to fail.” It worked perfectly. By this time we had 15 to 18 plumbers, and 13 to 15 sheet metal men onsite every day, and the pipe was going in, just as quickly as the duct.
Right after the first of the year, the air handlers showed up. These monsters weighing in at 11,400, and 9,300 pounds were a challenge in themselves. Although they were sectioned, some of the sections were well over 4000 pounds. Offloading, and maneuvering these cumbersome pieces through an existing building, then safely raising them the 13′ to the mechanical room was no easy task. Once in place, we unleashed our team of welders to make their final connections. Prior to the equipment arriving, Mike Rebert and Dave Reheard had spent several weeks working on the mechanical room rough-in.

With the lab corridors and mechanical room rough ins wrapping up that left the roof. With 8 rather large utility fans, air monitoring stations, energy recovery coils, and 48″x 50″ ductwork, some of which ran 7′ above the roof. Our work was cut out for us again. We enlisted the services of our drafting department and created a downloadable fabrication drawing. Once the drawing was complete, it was sent to the shop, loaded into the Vulcan, and fabrication began. The shop not only fabricated the duct, but they also assembled multiple sections together. With these sections assembled, the duct was loaded, shipped via tractor and trailer to the site. After receiving all the equipment, and ductwork for the roof, we utilized a 170-ton crane to set everything in place. This was completed in 4 short days.

Although the list of names is too long to mention here, I would like to thank everyone who participated in making this project a success. Looking back on the project, it was good planning, teamwork, and hard work by everyone that helped us stay focused, on schedule, and made it an overall success. The project was successful in my opinion for two reasons. #1 Those 10,123 man-hours were worked in a very condensed window of time without an OSHA recordable, or so much as a single first aid case. #2 We’ve been awarded a second project with Genesis in the GMP area of the facility. We also picked up two smaller projects directly for PPD. To me, the best way a client can tell you, “you did a good job” is their repeat business. 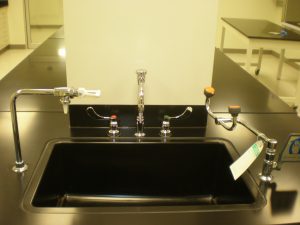 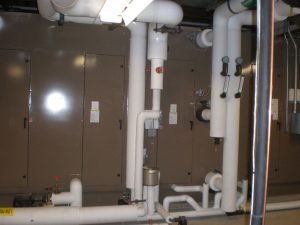 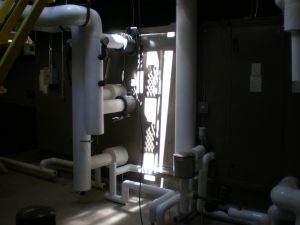 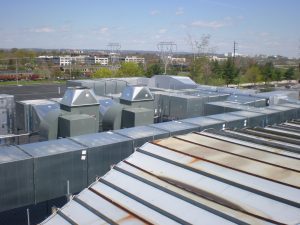